For ex-cadets, students & staff of Warsash Maritime School, founded in 1935 as The School of Navigation, and the Warsash Superyacht Academy 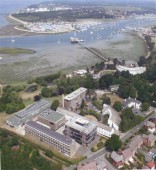 The new house flag and marketing materials looked fresh and modern, but the same could not be said about the campus which had barely changed since the days of the morning run and ‘divisions’ on the parade ground. Between 2006 and 2020 this was addressed by means of substantial investment in both buildings and equipment designed to transform the academy into a modern, high-tech institution. Although the Warsash brand and logo were retained most of the new facilities would be based in Southampton, with only the fire-school and survival centre remaining on the original campus

The investment programme began in 2009 when plans were announced for a new manned-model training facility at Timsbury. Shiphandling courses continued to be run at the old Marchwood site whilst the Timsbury facility was developed, including reconfiguring one end of the lake to form a curved canal. The new facility was formally opened by the university’s Chancellor, Lord West in 2011. Another former mariner, H.R.H. The Duke of Edinburgh, visited later the same year and then again in 2015.

In 2010 there was a significant upgrading and expansion of the bridge simulation suites followed by a new machinery space simulator in 2012.

Andy Hair was appointed Director of Warsash Maritime Academy in 2011.

The new Warsash Superyacht Academy was launched in 2012.

It was during this period that detailed plans were drawn up for the next phase of investment. It soon became evident that most of the new facilities would be situated in Southampton rather than Warsash, partly because there were listed buildings and other obstacles to developing the Warsash site, but also because there were suitable spaces available at Southampton where estate development was already under way.

Andy Hair resigned as Director in 2015.

Professor Sayamantak Bhattacharya oversaw the development of the new simulation centre and the St Mary campus in Southampton.

The St Mary campus accepted its first cohort of cadets in September 2017 and was officially opened by H.R.H. The Princess Royal in January 2018.

The new simulation centre, situated on the ground floor of the Matthews Building on the main university campus, was opened by the Sir Michael Bibby, President of the UK Chamber of Shipping, in 2019.

By this time the upper part of the Warsash campus was no longer in use, but fire-fighting and survival continued on the lower site as before. The work which was needed to make the lower site independent of services from the upper campus was completed and some refinements, including the provision of a new flagpole for the Red Ensign were also carried out. However more ambitious plans for new buildings, including a survival pool, had to be put on hold because of the Covid pandemic.